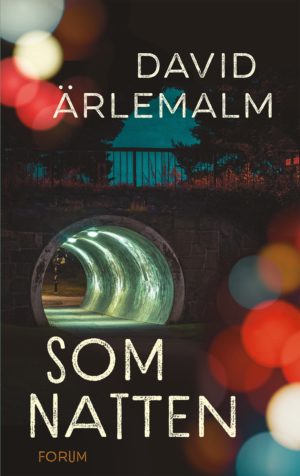 As the Night is a fast-paced novel about how thin the line can be between a lawful life and the opposite. It is about Asynja, a young woman who is dragged into her boyfriends net of lies and drug deals gone wrong. A new mom who tries to protect her four-month-old baby and keep herself over the surface but finds herself further and further away from the life she dreamt of.

It is brutal but yet warm story with characters that stays with you long after the last page has been read.

“The shifting perspectives has a huge impact in making As the Night into a vivid and intense novel, seemingly simple in its execution. Those interested in the art of writing have a lot to learn in this text.

Ärlemalm uses small means and details, like when Asynja waits ten minutes before ordering her next glass of wine, to seem as indifferent as the alcoholic never is, or when he in the passing shows how carefully his character moves around the minefield that is life with a violent partner.”

“Somehow this author has, after publishing only two books, created a niche of his own with credible and deeply moving storytelling from the hidden world that exists just around the corner. Where a broken parent's love for his or her child is the force to break new ground and find new ways; a courage that shines a light even when those new ways might still be detours. Kudos, David!”

”Not one line seems misplaced /…/ A well-engineered tension raises the page turner-effect and one happily finds a new authorship that truly makes one feel something, an authorship that is much needed, and one you’ll want to stick by for a long time to come."

”David Ärlemalm knows the art of making a character sharp and deep, no lengthy descriptions and explanations needed. From the very first page, you understand and feel for Asynja. Through her, you feel the stress of living outside the society’s rules and protection, always ready to fight and flight. This is the major strength of the novel."

”Two parallel novels, first from the man’s and now the woman’s perspective, both united by the same qualities: tenderness, warmth and compassion. Ärlemalm turns his eye to the good in people. He sees a fellow being, getting by to the best of her abilities - when others are more likely to be horrified and merely see the shell of a person and a liability to society. His narrating is scarce. Between the lines, and outside of the novel, one will find a bigger story."

”A truly thrilling and absorbing story that is very hard to put down before you finish reading the book."

“David Ärlemalm delivers another strong story about broken people and the dark side of society and of the Swedish capital. As the Night is a kind of social realistic crime novel that, just like the authors debut novel, feels refreshing in the stream of crime fiction.”