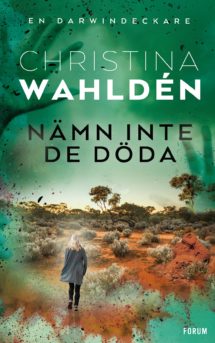 Swedish art-student Greta leaves home, wanting to get as far away from Sweden as possible on her backpacking adventure. In Darwin she finds herself in the oppressively hot and horribly humid build-up to the The Wet, the monsoon rain season. The climate alone is enough to drive anyone mad. And if the mango-madness and crocodiles wasn’t enough, there’s a killer on the loose, out to get the most vulnerable, the most neglected. Senior Sergeant Patrick O’Boyle, going by the Aussie-humorous nickname Bluey because of his red hair, leads the investigation. He has help from his new colleague Jess, who has an indigenous background.

A character-driven, new, fresh, and horrifying crime series with a great buzz in Sweden already months before the publication.

The perfect way to visit Australia – with a Scandi-crime twist.

”There’s a rage in DON’T MENTION THE DEAD that reminds me of Katarina Wennstam /…/ Thrilling until the very end.”

”The investigation enlightens the life of the indigenous population in general, the women in particular, and the author makes it her mission to focus on this matter. Wahldén’s background as a journalist shines through; this story has obviously called for extensive research and the execution is impressive. The Swedish touch is the one of art student Greta: a smart grip that allows an outside perspective. To be continued – thankfully.”

”DON’T MENTION THE DEAD is upsetting, educating, thoroughly suspenseful and you can sense a great love for this continent, and not to mention this small part of it that we get to know through Christina Wahldén. It is brave that a Swedish author brings us to a whole other part of the world, but as far as I can tell she does it brilliantly and I hope that we will be able to return to Darwin soon.”

”Christina Wahldén’s fourth crime novel is also by far her best one. The reader can feel the humidity, the heat and the scents, and you hear the rumble of sounds from the city and its inhabitants. Although this is a book about violence and racism, it is above all a declaration of love to the place and the culture. And despite the thrilling plot, it is the depiction of Darwin that will linger on within me.”

”I am enchanted by the atmosphere and environment that Christina Wahldén depicts as a background to the characters. She succeeds in portraying the trying temperature as well as the beautiful landscape. Despite the heat she creates an urge to visit. The intrigue is well constructed /…/ It is a bold move to place a Swedish crime novel in unknown grounds far away. But when you do it as skillfully as this it doesn’t feel very distant. The characters and the setting is quickly familiar and you want to read and learn more. How very fortunate then that there will be more books about Bluey, Jess and Greta.”

”DON’T MENTION THE DEAD is a thrilling criminal story, but what really makes the book interesting is the author’s knowledge on the Australian indigenous culture and history. The nature as well as the characters are finely portrayed.”