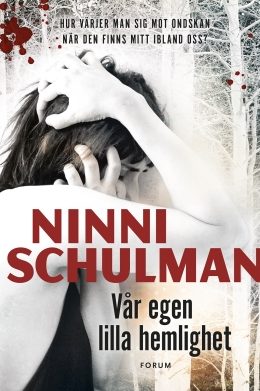 Our Very Own Little Secret

In the fourth instalment of the Magdalena Hansson-series Ninni Schulman has tightened her grip on the plot while building high-voltage suspense. Her unparalleled, rich characters feature in a story about the mechanisms of power in close relationships, and how unpredictable domestic violence lashes out at the innocent and defenceless.

Anna-Karin Ehn works as a social welfare secretary. One evening when she doesn’t return home from work, her worried husband calls the police. It is well-known that brutal threats are not unusual in her job.

The next day the police find her car deserted in a wooded area outside their small town. They also find traces of blood.

Anyone would have said that Anna-Karin’s life appeared to be quite ordinary, but soon Petra Wilander and Christer Berglund at the Hagfors’ police find unexpected surprises under the neat surface.

Magdalena Hansson has returned  to work after the maternity leave, and her first assignment is to write about Anna-Karin’s disappearance. The more she writes, the more she cares about the people involved and takes even greater risks. Until, once more, her own life is in jeopardy.