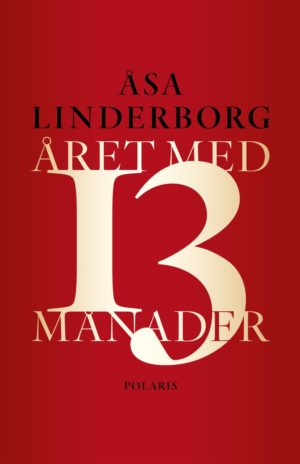 The Thirteen-Month Year is a diary from autumn 2017 to autumn 2018. It was a dramatic year in Sweden, with intense public debates concerning populism, freedom of expression, #MeToo and the Swedish Academy.

During this diary year, Aftonbladet culture editor, Åsa Linderborg, occupies a controversial position of her own. A few months short of her fiftieth birthday, she is abandoned by the man she loves. Four days later, she is accused of causing asuicide. The child in the coming-of-age novel Nobody Owns Me is now an adult trying to deal with two crises, one private and one professional.

It is a soul-searching, polemical portrayal of the public arena and a woman in the middle of it. It is about taking a stand, about betrayal, doubt and feelings on media power and inevitable aging.

“Can people tell I live alone? Before, when P was out of town, I would book a table at KB all for myself. I would read and handwrite articles in the restaurant buzz, on those white tablecloths I longed for as a child. I would order a glass of wine and find an expression or idea that made me tip a lot more. I no longer do that. After work, I go home alone, to an apartment where no one but me cares how I live my life.”

”Insightful and uncompromising….Linderborg’s diary is both thoughtful and provocative…An unusually complex, interesting and contradictory book about the Swedish Me-too movement in 2017 and 2018.”

“One of Scandinavia’s foremost and most well-known debaters. Linderborg depicts the year when Sweden’s cultural elite fought trench wars, when the debate of freedom of speech, feminism, the Swedish academy and Me Too took off and when the author herself went through a deep personal crises. Exciting, but frankly also a harsh read.”

“Well written, merciless, brave…through diary notes over one year the narrator Åsa takes us through an editorial state of hell with political correctness in a dangerous dance with clicks and press ethics. Linderborg’s book is vulnerable, straight, and a true step into purgatory – very well argued and at the same time emotionally driven.”

“The thirteen-month year is packed with spreads for those who wish to discuss the spirit of the times, life, politics and love. Åsa Linderborg is intellectualy inviting and generous” (…) “What shapes a human being? What determines their choices? Their decisions and wrongdoings? There is a thrilling and vivid pace in her daily notes.”

“Åsa Linderborg’s perspective on the chaotic year in media 2017 – 2018, is
inalienable”

"Åsa Lindberg has written a marvelous fusion of several genres: journal, personal essay, political discourse,and love story. Here, there are no boundaries between the private and the political: she singularly demonstrates how issues of class and economy intervene in a person’s life every day and never loosen their grip. She depicts the nocturnal doubt and turmoil of a prominent writer once a text is delivered and published. The Thirteen Month Year is a sincere and moving book about life, writing and aging – now as a single woman."

Danish edition of The Thirteen-Month Year takes critics by storm

First print-run of The thirteen-month year sold out in two weeks!

Åsa Linderborg’s polemical and brave literary diary, ‘The thirteen-month year’ is the talk of the town this late summer in Sweden, and opinions are as numerous as its readers. The book is flying off bookstore shelves and topping best seller lists. Over 7000 copies have been sold in two weeks and a re-print...