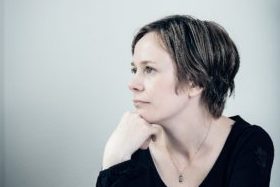 Established in 1950, the Nils Holgersson Plaquette is awarded annually by the Swedish Library Association to the best children’s or young adult book of the year.

In The King’s Daughter and its sequels War Time and The Raven Goddess Elisabeth Östnäs has offered a mighty portrait from the Viking age, in which the female protagonist is depicted as warrior, mother, spouse, and oracle.

The readers are introduced to a young woman who must flee from her home. Östnäs skillfully shows what happens to a person who is forced into exile; the timeless search for a home and an identity is represented in a powerful way. The character of Turid is brought to life in a bleak reality with the odds stacked against her but with the strength to find her own path.

The world depicted is a violent one, but the violence is never exploited as entertainment. Pagan rituals and early Christianity are described in an innovative way. Moving and memorable scenes are rendered in sparse prose, providing a suspenseful pace. Elisabeth Östnäs has written three vital novels about the Viking age for all ages.