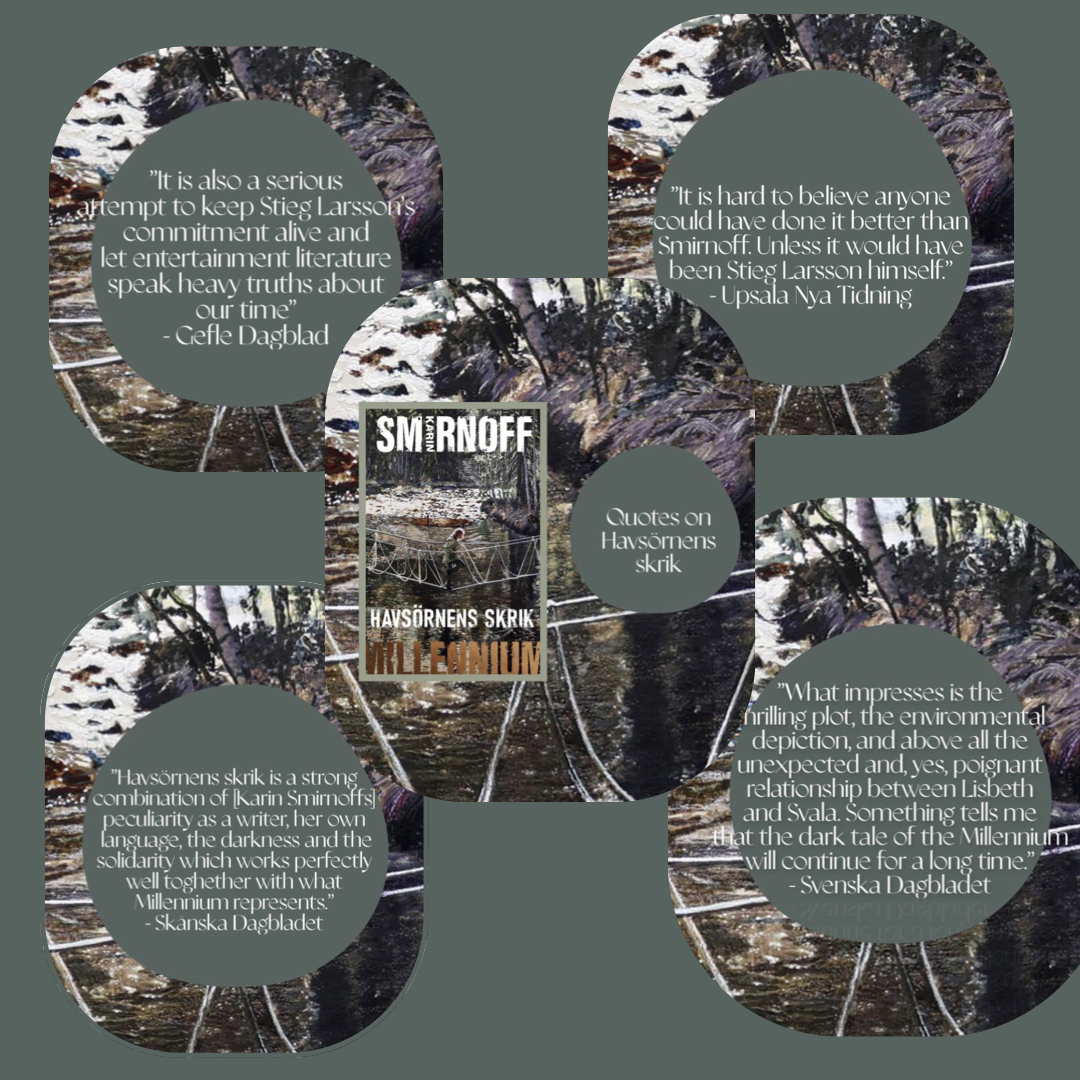 “It is hard to believe anyone could have done it better than Smirnoff.  Unless it would have been Stieg Larsson himself.”

Karin Smirnoff’s Havsörnens skrik received a warm welcome from the Swedish press, here it a selection of review quotes on the amazing crime novel:

“Men Who Hate Women was the starting point for Stieg Larsson’s Millennium success. A feminist perspective and the theme of men’s violence against women and women who strike back was strong throughout the trilogy. Not least through Lisbeth Salander and her background story. As Karin Smirnoff takes over The Millennium baton after David Lagercrantz she proves that she is exactly the right writer for this central theme.” (…)

“Havsörnens skrik is a strong combination of her peculiarity as a writer, her own language, the darkness and the solidarity which works perfectly well together with what Millennium repreents. Not least because Smirnoff too has room for humor and a twinkle-in-the-eye drive with both our current time and Stieg Larsson’s two old heroes.” (…)
Skånska Dagbladet

“The order is restored: Larsson’s sharp social criticism is back”
Arbetarbladet

“Letting Karin Smirnoff take over the baton after David Lagercrantz is a
stroke of genius. It is hard to believe anyone could have done it better than Smirnoff.
Unless it would have been Stieg Larsson himself.”
Upsala Nya Tidning

“Everything is, of course, connected as it turns out. The force of the plot carries over loose snow and through bombshelter doors. But what ultimately remains, and what is Smirnoff’s great achievement, is how she time and again disrupts the narrative with the question of the children. The boys who get beaten and grow up to be men who beat women. The Lisbeth girls, with their chronic maternal grief. Those who know that it is always too late to have a happy childhood. There the connections to Smirnoff’s previous books become clear. This is as it should be, as there is the feminist anger, the founding connection, that unites her with Stieg Larsson. The one that is, literally, carried through smoke and shell fire by Lisbeth and Svala together.”
Västerbottenskuriren

“Overall, we more than approve of Smirnoff’s debut a crime novelist (…) what impresses is the thrilling plot, the environmental depiction, and above all the unexpected and, yes, poignant relationship between Lisbeth and Svala. Something tells me that the dark tale of the Millennium will continue for a long time.
Svenska Dagbladet