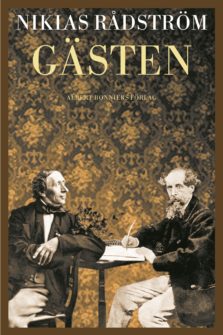 In the summer of 1857, H. C. Andersen embarks upon a long European tour. He brings along three editions of his new novel, Being or not being, in Danish, German and English. The primary purpose of his journey, however, is to visit the person to whom the new book is dedicated: Charles Dickens. During the spring, he had received a letter from Dickens all but pleading that he come visit – an invitation which Andersen naturally must heed. The two writers are both at the height of their careers, they admire and respect one another. But their encounter will not fulfill the expectations that they both have conjured. After only a few days, Dickens cannot get rid of his guest quickly enough, but Andersen stays with the family for five weeks. After that, they have no more contact, despite attempts by Andersen.

Niklas Rådström’s novel is a reimagining of a real event, and a meditation on the conditions of writing and the dream of friendship.

A film adaptation of the novel is in pre-production, directed by Jan Troell.

A full English translation by Frank Gabriel Perry is available.