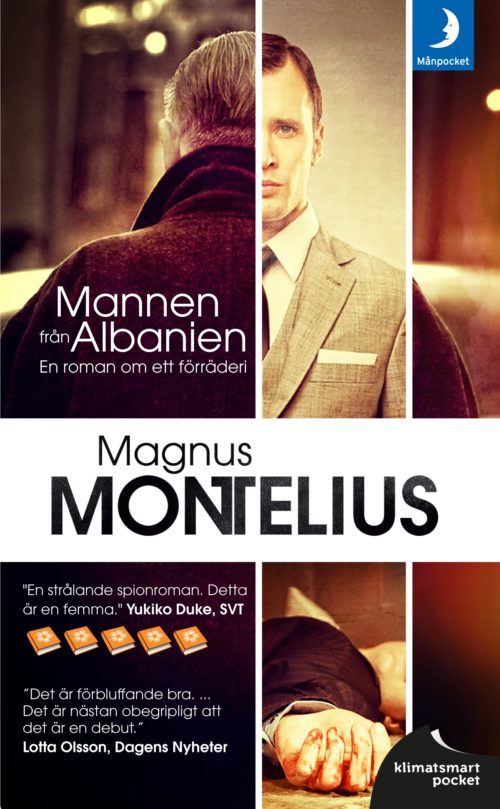 The Man from Albania

It is the autumn of 1990 and the iron curtain has nearly completely crumbled. A man falls to his death from a hill overlooking central Stockholm. He carries an Albanian passport, but the Albanian authorities deny his very existence. Three men turn up at the scene. One to carry out a routine investigation, another is looking for a story and a third seeks refuge from the rain. They will all discover that the truth about the man from Albania is much more complicated than it first appears. It traces back to the political movements of the sixties, to a tight- knit group of radical students who buried their past but kept their loyalties as they advanced in their careers. At the heart of the matter is a betrayal that one of them is desperate to hide.

The Man from Albania is an espionage novel about Sweden during the cold war and political movements in the sixties and seventies. It is an intriguing and intelligent page-turner. The book has been unanimously praised in Swedish press as an exceptional debut.

“Magnus Montelius’ debut is a story that resembles John le Carrés early chamber play-style spynovels. With its understated tone, finely drawn characters, stringent plot and precise capturing of the atmosphere of a political upheaval The Man from Albania is one of the more remarkable books in the current flow of crime fiction.”

"The man from Albania is Magnus Montelius' beautiful and excellent first novel. It is such a highly thrilling and well-written spy novel about a time not long ago when the KGB was still among us. … The novel is also a sharp and sardonic account of the ambitious academics and politicians who, in the decade before 1968, swam in the murky ideological waters where both East and West fished for secret agents, covert followers and useful idiots."

“It is astoundingly good. [...] constantly thrilling [...][Montelius] skillfully depicts the great historical turns of the sixties and the seventies through the individual persons’ lives and standpoints. They get to be persons, not roughly carved types. [...] Magnus Montelius keeps his story tight all the way through and elegantly flips it upside down several times. It is hard to believe that it is his first novel.”

“Magnificent. Magnus Montelius manages to take the spy novel one step further. [...] It is very skillfully described. A nice account of the time period, a nice portrayal of the people. What makes it particularly interesting as a novel, is the portrayal of the characters. What are their motives? Why do they act the way they do? It is the way in which he describes that, that makes this novel completely exceptional. It is a splendid novel and a splendid spy story."

"The last days of the year bring us a debutant who writes like an out-and-out professional. [...] a constantly thrilling story about people high up in the hierarchy, doing whatever it takes for their past not to be disclosed.”